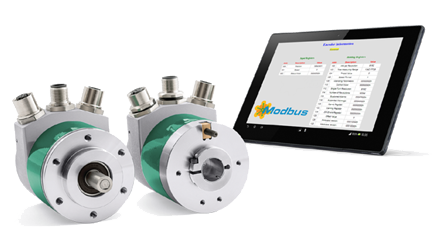 Following the popularization and promotion of the networks based on Ethernet and TCP/IP in the field of the industrial automation worldwide, Lika further complements the Ethernet protocol encoder family and launches the new Modbus/TCP series, just a few months after the recent Powerlink series.

Modbus over TCP/IP is an extension of the popular Modbus RTU protocol to replace the serial connection with Ethernet technology. According to a recent resear­ch report, serial Modbus is estimated at 7% of the ove­rall market share, while Modbus/TCP is at 3% currently. Both they are among the market-leading protocols; furthermore they are commonly and homogeneously used worldwide, from USA to Europe and Asia. Among the reasons behind such popularity are sim­plicity and ease of interface, low-cost development, minimum hardware requirement and high reliability. Modbus/TCP is user-friendly and basic and can be im­plemented fast and uncomplicated.

Lika encoders with Modbus/TCP interface are available in three series:

Parameters and diagnostics can be easily mana­ged either by means of the HTML pages of the integrated web server or by using a generic PLC.

(Modbus/TCP protocol does not require specific PLC) or any Ethernet connected device in compliance with the “Modbus over TCP/IP” protocol. LEDs for visual diagnostic information (operating status of the interface and the device) are further in­stalled.